In this tutorial we will explain how you create a SSH Key pair and how to use this key to authenticate on remote devices.

SSH, that stands for Secure Shell, is a network protocol used to establish an encrypted connection between two devices. The SSH protocol supports either the use of a username and password combination, or the use of public key cryptography for authenticating hosts and users.

The SSH Key has two pair components: a private key and a public key. Only a private key can decrypt messages that have been encrypted with its pair public key. The public key is the shareable part of the pair, which is saved on the devices which you want to access.

On the other hand, as the name suggests, the private key is private and should not be shared with anyone. In nature SSH Keys are authentication credentials just like passwords, which means should be managed carefully.

The most common type of key used is an rsa key. Today, we should preferably use a more secure algorithm like ed25519. We will demonstrate how to create both.

How to create a SSH Key – old method

To select the algorithm we’ll use the -t option. To choose the key size, in bits, you must use the -b option, and we can also add a comment (to identify the key or key owner). To generate a key using the rsa algorithm and 2048 bit size, you may use the following command:

When asked to enter passphase, just hit enter to proceed without one. Unless otherwise specified, the key will be stored at your user home directory in the .ssh folder. Listing the contents of your .ssh directory you’ll find two files, id_rsa corresponding to the private key, that you should never share, but keep it secured, and id_rsa.pub, the public key, that is to be installed on the remote machines.

How to create a SSH Key using the ed25519 algorithm

We must keep in mind that older ssh clients may not support ed25519, as it is a more recent and secure format. Also, when creating a ssh key using the ed25519 algorithm, there is no need to set the key size, as all ed25519 keys are 256 bit. This is due to the completely different type of cryptography being used, and therefor, has the same security at different key sizes. One could say, it’s not about size!

These keys will also be stored inside the .ssh folder at your user home directory. Check them out:

Securing the SSH key with a password depends largely on the usage intended for the SSH key. SSH keys for users should be protected by a passphrase. That way, if anyone is able to start a session with your user, or even get access to the private keys, they won’t be able to use it.

However, SSH keys can also be used to automate several tasks, like ansible or even to copy backups over to a remote server. If no user interaction is expected when using the keys, the passphrase should be left empty. SEO vs PPC – An Integrated Analysis in 4 Topics How to Choose a Great Brand Name – Part 2 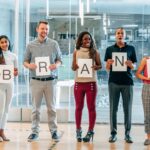 How to Choose a Great Brand Name – Part 1